Hero, legend, icon. Words that get bandied around quite cheaply these days, especially in sport. I actually get embarrassed when I recall the number of times I’ve been asked to describe my sporting hero, and realise just how many different names I’ve offered in response – Botham, Toshack, Borg, Woosnam, Latchford, Edwards, Ovett, Thompson, Dalglish, Richards – the list goes on and on. But often, those names are given instantly, knee jerk reactions to a polite sporting enquiry. However, when I sit down and consider the question and really understand the importance of giving a solid, thoughtful reply, I always come back to one name. 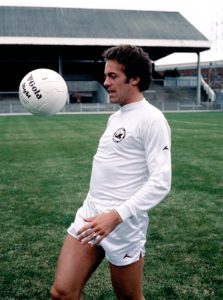 My grandparents on my mothers side lived in Mount Pleasant, in a big, imposing, run down house on Heathfield, opposite the Heathcliffe Club. My Grampa, Fred Ridge, a strong, formidable World War II veteran, was the secretary of the club, and seemed to spend his life there. On the odd occasion when I visited my grandparents and Fred wasn’t over the club, he’d be sitting in the front room, drinking tea and picking his horses from the newspaper. Occasionally, the door would open and in would breeze a man offering a cheery “hello”, which would see my grampa beam when he heard the voice. It was Swansea City legend, Harry Griffiths, my Grampa’s best friend. 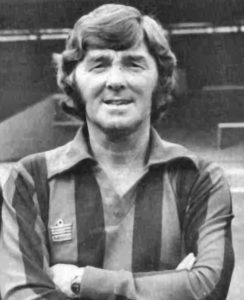 I adored Harry. He was so lovely to me, teasing me about needing to be able to kick with both feet not one, promising that one day I’d be his ball boy at the Vetch and if I really worked hard at the game, how I’d get a chance to play – for him – at my beloved Swans. Harry would tell my Grampa and me tales of the Swansea born players he’d grown up with like John and Mel Charles, Ivor Allchurch and many others, and I’d sit, captivated by Harry’s stories. Then, when the conversation moved on to ‘men’s talk’, I’d scoop up my ball, run outside and start playing ‘ball against the wall’, secretly hoping all the time that Harry would be watching from the window, making notes and already planning my long career with the Swans.

One day, smashing the ball against that big old Social Club wall for about the 100th time that afternoon, a car came down Primrose Hill and turned right into the little cul de sac at the end of Heathfield and parked up. It was Harry. I pretended not to see him and continued to do my best stuff, which for a seven year old, wasn’t that great. Harry called across, so I stopped, scooped up the ball, and ran to see him. But he wasn’t alone. This time he had someone with him. A handsome young man with a beaming smile, blue eyes and a crop of dark curly hair, a style with which I was similarly blessed. “Come and meet the next big star of the Swans” Harry shouted to me, “This is Alan. Alan Curtis….he’s going to be a special player for us.”

I remember Alan shaking my hand, smiling broadly and asking for a look at my football, then doing a few keepy ups, before having a quick kickabout with me. All too soon, Harry asked if my grampa was in the club or the house – the club obviously – and took my new hero to meet my Grampa inside the club, which was off limits to my seven year old self. Now, only a football fan will understand this, but as the 18 year old Alan walked off with his manager and landlord (Alan lodged with Harry and Gwen Griffiths in his first few seasons in Swansea) he turned to me, smiled again, and said “Keep practising, David, that’s all you need to do”, well, frankly, I fell in love. And writing this, as a very middle aged man who has followed Swansea City for the following 46 years, that love I have for Alan Curtis remains as strong as it ever was since that day back in 1973.

To pinch from Shakespeare, this has remained an unrequited football love. I don’t know Alan Curtis personally, he’s not a mate of mine. To my seven year old mind, though, he was my new best friend and was going to be my footballing guiding light, but sadly, like many childhood dreams, that didn’t transpire. My relationship with my hero was confined to watching him on a Saturday, from afar, along with the thousands of other Swans fans who were entranced by his guile, speed, touch and goal scoring prowess over the following 20 years or so.

I have so many memories of Alan on the field, far too many to list here and most – like the Preston game or the Leeds goal – will be mentioned in tributes elsewhere, but the one I want to focus on is a quite ordinary game that took place at the Vetch in Tosh’s First Division days. Somehow, my Dad had got two Centre Stand tickets for the game against Stoke City. We normally watched from the terrace under the East Stand, so he was quite excited to get a seat for once, but the match was in doubt due the weather. It absolutely poured down. So much so, about an hour before, rumours were spreading that the game might be called off. Water was settling on the pitch and Harold Woollocott and his ground staff were attacking the grass with their pitchforks, desperately trying to get the water to sink deep into the soil. Thankfully, they succeeded, but all they’d really managed to do was transfer the water a few inches beneath the surface. Almost as soon as the game kicked off, the pitch cut up. Within 10 minutes, the surface more resembled a corner of the Somme than a football pitch, but to one player, it didn’t matter. Alan Curtis. 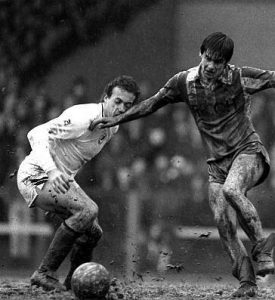 Curt dancing over the mud at the Vetch against Stoke City

Stoke City possessed the current England centre half as their captain, Dave Watson, a fearsome defender who resembled a character from ‘Arthur of the Britons’, uncompromising, unsmiling, an assassin of a defender whose fearsome reputation was well known. Well, Alan Curtis must’ve made him wish he was unknown, because on that treacherous surface, he made Watson look a novice, turning him inside out repeatedly and so often that if it had been a boxing match, they’d have stopped it. 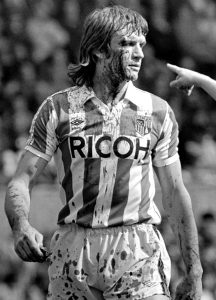 The Swans won 3-0, Curt having a hand in all three, but I’d never seen such a performance of poise, speed and skill from any player on a surface so unsuitable for football, it had almost been balletic. I’ve never forgotten that game, Curt was magnificent.

Many, many years later, I wrote my first book. Called “There’s Only Two Tony Cotteys”, I wrote it with Tony who had spent three years in the Swans first team squad, under Tosh and alongside Curt. He’d approached Curt who’d given a lovely quote for the cover, and one afternoon at Cover to Cover bookshop in Mumbles, our publisher had organised a book signing. Predictably, I was nervous, it was my first experience of such a thing and didn’t really know what to do with myself, especially when someone was kind enough to buy a copy and then ask me to sign it. 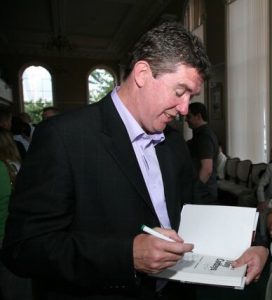 Now, how do I spell my name again?

In a quiet moment, Tony came across to me and announced, “Oh, I forgot to tell you, but Curt said he’s coming”. My nerves instantly went up a notch.

Then, about ten minutes later, the door opened, and in walked my hero. This was 2008, so it was when Roberto was building his legacy and Curt was right at the heart of it. He came straight over to Tony, at which point Tony introduced him to me. Even though I was in my 40’s, I blushed and could hardly get my words out. For the next ten minutes, Alan spoke to us as if we were the most important people in the universe. He was so kind, generous and funny, that I had to pinch myself to believe this was happening to me. Then, Alan turned to Tony and said “right, let me buy one of your books then”. Tony, of course, refused, “No, your not buying one, you gave us the quote for the cover, you’re having a complimentary”. But Alan was having none of it. He left us, walked over to the counter grabbed a book and bought one. Then, he came over to Tony to have it signed. Not wanting to get in the way of two old team mates, I stepped away at this point and walked over to the counter to chat with our editor. A moment later, there was a tap on my shoulder, it was Curt. “C’mon Dave, I want you to sign it too”. I couldn’t believe it. I froze. I had about 15 Alan Curtis autographs at home, collected at various times and events over the years, and often on the street outside the players entrance at the Vetch. He handed me the pen and his book, and I just couldn’t bring myself to do it. “This is ridiculous”, I said, handing the book back to him, “I can’t sign this for you, you’re my bloody hero…it’s not right!”. Alan just laughed, handed me back the book and pen and said, “No, today’s your day, Dave, and I’d really like your autograph”.

I don’t think I have ever been happier or more proud.

They say to beware of meeting your heroes as they’ll often disappoint, and in my writing career that has followed the publication of that book with Tony, I have met one or two that have certainly fallen short of the persona provided on TV, but not Curt. That brief quarter of an hour in his company remains a genuine life highlight for me. I’ve met him a few times since, and as you can imagine, with the idolatry he receives from thousands of fans, approaching him at almost every step he takes in Swansea and his beloved Mumbles – he won’t know who I am. And I’m just fine with that. I’m just happy with the memories. The kickabout at Heathfield, the public slaughter of Dave Watson and the autograph in the bookshop, along with the many hundreds more games I saw him play for the Swans and Wales.

Swansea Town/City have had many legendary players, but only a handful of club legends – people who have given their whole adult lives to the club – namely, Joe Sykes, Harry Griffiths, Alan Curtis and currently, Leon Britton. They span almost a century of the history of our great club, and whilst we should never really try to compare wonderful people like this, has there been a better servant than Curt? I don’t think so. 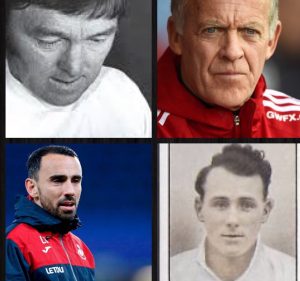 So, happy retirement, Curt, it has been a pleasure to witness your service to the club in so many different roles, but to me, you will always occupy the most important of roles…..the hero, legend, icon that is….Alan Curtis. 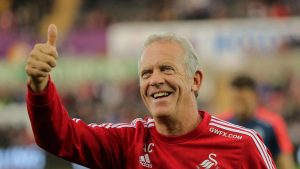