Ok. I have an idea for a novel. A once proud football club falls on hard times. So hard in fact that they nearly go out of business. The club is bought by the “villain” of the piece for a pound. In fact, let’s say he came all the way from Australia with his pound. Then, after lurching from crisis to crisis, most of the players are threatened with the sack, get their contracts cancelled and the Australian villain receives death threats – personally delivered – flees the country for safety, but not before selling the club for twenty grand. A nice little profit for the bad guy. The twenty grand is provided by 10 local fans – among them a builder, a travel agent, an accountant, a Dutchman whose love for the club began when he advertised for a pen pal in the Swansea City match day programme in the 1980’s and ….oh, let’s see….how about a South African businessman who knows little about football, and who lives in New York? Room is also made by the new owners for a twenty per cent stake in the club to be bought by any fans who – via bucket collections around the town, raffles and emptying life savings – can raise enough money to buy a slice of a Football League Club themselves. The club is saved, but then embarks on a journey from 91st of the 92 Football League clubs, to joining the elite of the Premier League in…let’s say…eight seasons, winning a nail biting £90 million football match – at Wembley of course – on the way, whilst being managed by a man who had never played League football, been sacked from his only two jobs prior to his appointment and was eighth choice on the list of applicants put together by the board. Far fetched? Definitely. True? Well, incredibly, yes – all of it – and this simply extraordinary tale is told with great compassion, humour, warmth, and no little style in the extremely impressive documentary film, “Jack to a King”

The film begins in May 2011 with loyal Swansea City fans meeting at the club’s multi million pound home at the Liberty Stadium, rolling out of the city, on their way to London in a cavalcade of coaches along the M4, before arriving at the home of football, Wembley, in their thousands. The film then freezes at the exact moment of the kick off of this £90 million match, and transports the viewer back 10 years to a dilapidated, ramshackle football ground, the Vetch Field, home of Swansea City since 1912.

The story is told via revealing recollections by the key people who represent the journey the club took from the moment its very existence was threatened, when it was bought by our “villain” for his pound, up to its incredible victory at the 2011 Championship Play Off Final at Wembley, which propelled this small town club into the richest football league on earth, the Barclays Premier League. It is not just the club’s story, it is their story. And it is told by a variety of people, all providing contrasting perspectives.

We have the footballer who saved the club on the pitch, by scoring a hat-trick which won the most crucial match in the club’s history. He is James Thomas. He’s now an ambulance man. We have the captain of Thomas that day, whose regard and affection that he holds for Thomas is clear, touching and poignant. He is Roberto Martinez. He’s now a multi millionaire manager of a Premier League football club.

We have a lady – sitting in a laundry room – extolling her childhood love for the club, and joy of finally ending up working for it. She is Suzan Eames. She’s now the kit lady of the club. We have another lady – sitting in her bedroom – explaining how the club was her salvation when she experienced depression as a young woman. She is Abi Davies. She’s still a fan and she is healthy.

We have the villain – a curious mix of Cockney lilt and Aussie twang – giving his version of the events and how, rather than being the villain, he believes he’s actually the saviour of the club. He is Tony Petty. He no longer owns a football club. We have a saviour – with an accent rich in the unique sound of a Swansea Jack – revealing his angst and regret when realising with horror that he could have given even more money than he did from his travel agency fortune, when the club was faced with extinction if it lost its crucial relegation match against Hull City. He is Martin Morgan. He still owns a football club.

One of the most engaging features of the film, and very cleverly done, is that none of the people mentioned above, are ever named on screen. When we first meet them, we have to work out who they are and what part they have to play in the story from what they look like and from what they are saying before the full truth of this extremely uplifting tale is peeled back like an onion and interestingly revealed. As the film then develops, their significant part in the club’s rescue and subsequent rise is illustrated, and you – as the viewer – experience the comfortable feeling of a jigsaw puzzle falling into place as you understand the important parts played by these people.

It would have been very easy for the director and producers of the film to have presented us with a story of revenge and ultimate glorious, almost arrogant triumph, or even use the twee Welshness of harps and choirs. But that would have done the club and its fans a disservice. Instead, they took the completely opposite approach and very much looked within. There is self deprecation by the bucket load, there is naivety, there is great humour – the scenes featuring the North Bank Alliance are chilling in parts, but then laugh out loud funny, as they sit there recounting their story, anonymity preserved by some ill fitting balaclavas. Entertaining contrasts like this are littered throughout and ensure that whilst to a certain Bill Shankly and many, many fans of the beautiful game, who have stated that football is much, much more important than a matter of life and death, in truth, in this film, it becomes almost a matter of “Who dares wins Rodney”, because the tale of how the club was bought for £20,000, taken from a Swansea cash point and delivered to a secluded hotel room in a Tesco bag, could be straight from John Sullivan’s ‘Only Fools and Horses’, as could the selection process that led to Huw Jenkins’ appointment as club chairman – “It was easy really, we just got the meanest one to do it.”

This is not to trivialise the seriousness of taking over, buying and ultimately saving a football club, but just confirming that for every single person involved in the buyout, not one of them had any experience whatsoever in anything that they were doing. The viewer gets the feeling, that it could just as easily have been them buying a football club. It gives great hope to anyone who may currently be fighting what they perceive to be a genuine lost cause.

Another strength of the film is that there is no edge or hidden agenda. We are presented with Tony Petty for example, speaking publicly about his incredibly controversial tenure at the club for the first time, but we are not led by the director to hate or despise him, instead, we are allowed to listen to his view, listen to the views of others at the club at the time and then left to make up our own minds. It is a master stroke of the film to have Petty involved and his openness is to be commended. Like him or loathe him, he is an incredibly important part of the reason why Swansea City survived and ultimately prospered.

On viewing, you will have your own favourite contributors in the film, Huw Jenkins’ mum Morfydd “but everyone calls me Molly” for example, but in terms of a person wearing their heart on their sleeve, displaying passion, humour, modesty and, at times anguished regret for not doing more, Martin Morgan personifies the Swansea spirit. A self made man, from a very humble Swansea background, who, on realising his fortune in his business world, basically decided to spend a significant part of it on saving the club he’d supported as a boy. His recollections are fascinating, powerful and often very funny throughout.

But ultimately, the real star of the film is the club. Swansea City. It is the unique pull of that organisation and what it represents to the community of Swansea that drew together thousands of fans and, basically, made them stand against what they perceived to be a dreadful injustice. An injustice that they weren’t prepared to stand by and watch slip through their fingers and see their once proud club sink into obscurity and long forgotten history. And that message is an important one, probably the most important one that flows through every single frame of this film. It is a story of hope, and one that will inspire the fans of any sporting organisation that exists in any sporting pyramid of leagues anywhere in the world. You have a voice, you have an opinion and you can succeed, beyond your wildest dreams. It can be done, and it can be done by ordinary people.

The late, great Bill Shankly, who himself played a small part in Swansea City’s history as mentor to a young John Toshack in the 70’s and 80’s, left us with a raft of footballing quotes, one of which referred to football as “the beautiful game”. Well, I’m pretty sure if Mr Shankly was around today and able to view “Jack to a King” , he would call it simply, a beautiful film. 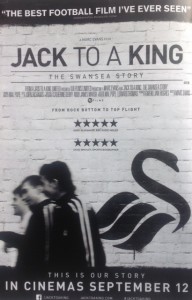 4 thoughts on “Film Review – Jack To A King”